For the first time since I got into racing back in May, I finally won a race. I did the 5K race at the Nova Scotia Mi’kmaw Summer Games (NSMSG), which took place in Membertou First Nation. For a great history of the Mi’kmaw Summer Games, please read up on it here.

Given my last several races that I’ve been performing pretty well, but just not winning first place, I wanted to win this one. It was going to be pretty tight juggling travels. I returned from Toronto on a Sunday night, then had to drive up to Membertou on Tuesday afternoon, race Wednesday morning, then return to Halifax that afternoon to teach class that night. What was also going to make this race extra special for me was that it was the first time that I was going to be representing my home community of We’koqm’q First Nation in a solo competitive event. I was a part of a tug of war team at the NSMSG in Potlotek in 2014, but I was thrown on a team of various individuals, and I don’t think we actually represented any community. Plus I think tug of war was considered a demonstration event of sorts rather than a competitive event back then.

The drive up was good with the beautiful weather, and that evening, my girlfriend and I bumped into some of my family and other friends around the Membertou Trade & Convention Centre (MTCC). We went to go find the elementary school (Maupeltuewey Kina’matno’kuom), as that is where the race was to start at 8:30 a.m. and I didn’t want any last-minute issues (namely, being unable to find the start). Once we found the school, we went back to the MTCC to head to Kiju’s Restaurant for dinner and my pre-race fuel/carb meal (a salad with chicken and quinoa).

The next morning, I woke up to a downpour (which I knew was coming). My immediate reaction was to check the NSMSG Facebook page for an update, hoping that the race was still on. While some games were cancelled/re-scheduled, the race was still on. Not wanting to take any chances, we left around 7:30 a.m. (as the runners were informed to arrive by 8:00 a.m.). I was actually one of the firsts to show up. I picked up my kit and race chips, and started my warm-up with some BODYATTACK™ moves. While I’ve run in the rain on occasion, this was going to be my first rain race. My running friend gave me a friendly reminder to avoid painted spots and manhole covers (as they tend to be more slippery in the rain). Soon enough, others started to show up and some of us chatted for a bit. Then eventually, my mother and one of my aunts made the one hour and twenty minute plus drive to come see me race. Needless to say, I was pretty happy.

When the organizer instructed us to lineup, the rain picked up even more. We were all waiting while a few other runners were registering last-minute. Before the horn started, I kept thinking about how I wanted to win this race, not just for myself with a potential personal best, but to be able to say that I won a gold medal for We’koqma’q.

After the last registrant got to the lineup, the horn sounded and the race began. As this was a 5K, I knew that it was okay to put more effort and energy early into the run. I was going for speed over a short distance, and not a long-term pace. I ran past behind the school with an early lead (after viewing a video taken) and down Tupsi Drive (Mi’kmaw for alder wood). I was to go off Tupsi Drive onto Kitpu Crescent (Mi’kmaw for eagle) then onto L’nu Avenue (Mi’kmaw for The People, a self-referral term), and then back onto Tupsi. I kept a pace and assessing myself, and I knew that I was capable of going a bit faster. So every so often, I re –gauged where I was internally, and estimated externally where I was in the race (I wasn’t running with a tracker activated). Then I saw one of my cousins (who was also one of the organizers of the NSMSG) with her iPhone taking a picture and cheering me on (and I replied with a smile and wave). 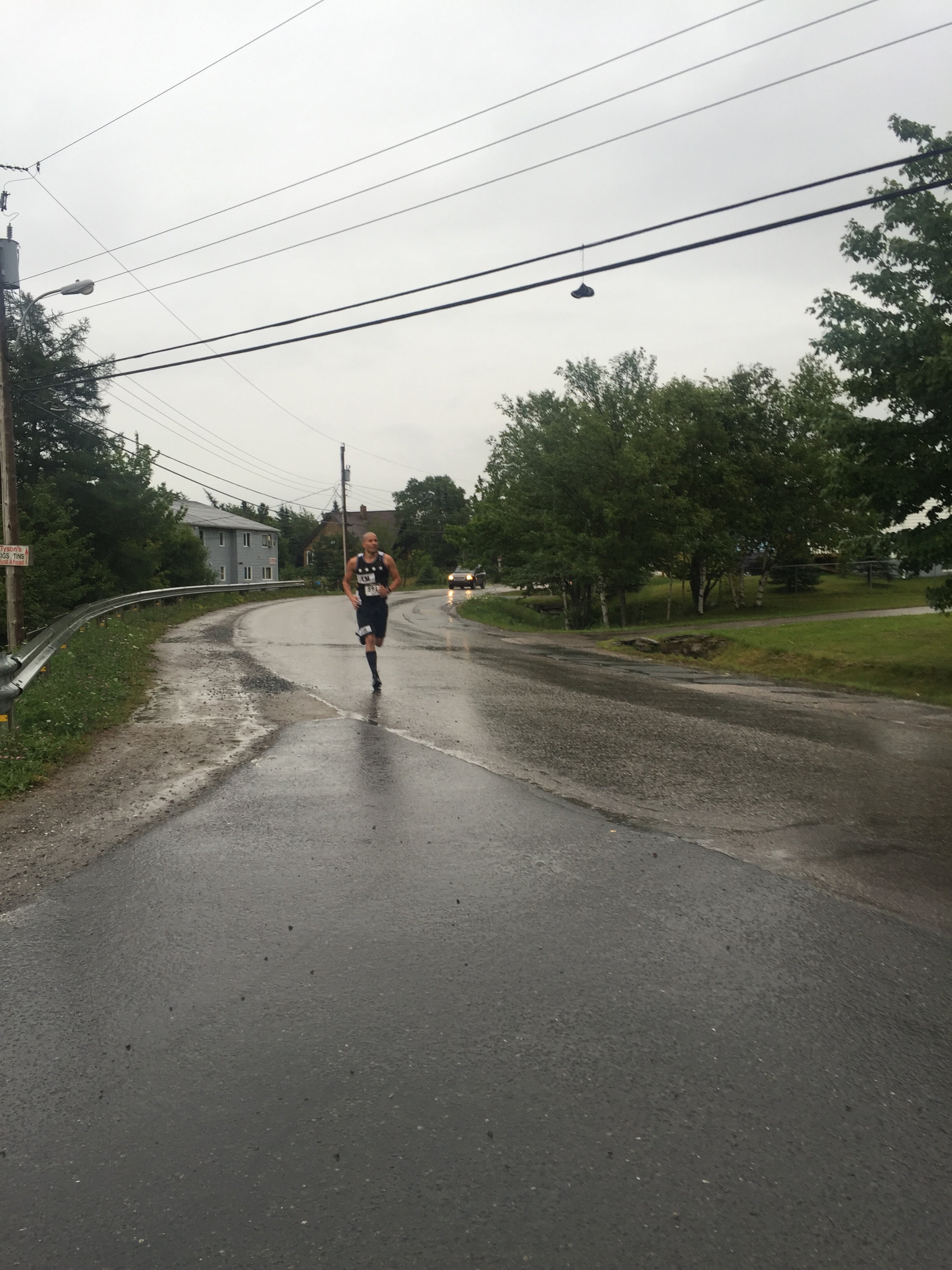 Almost at the halfway point. Photo courtesy of Marcella Marshall.

I knew that the Membertou Wellness Centre was the halfway point to turn around, although when I arrived, I wasn’t sure if I did a short loop or what, but the guide simply told me to run back. Now, when I race, one of my personal rules is that I never behind me (I took this from Bret Hart’s autobiography, where I believe he said this about his grandfather on his mother’s side, who ran a marathon where Tommy Longboat also competed). But given I was to run back, I was going to essentially “look back” at where I came from, and who was “behind” me. However, I didn’t immediately see anyone as I made my way back up Tupsi Drive, and ran by the second closest runner about 30 plus seconds later. Even with my comfortable lead, I knew that I couldn’t slow down. It was a 5K and was very capable of keeping a good pace.

At the start of the race, I was informed that I was to loop back as how I started and did just that. I was encountering and crossing more and more runners, giving them quick waves and thumbs up to keep them motivated. As I was on last part of the race, one of my cousins drove by me for a bit, which was a nice boost of moral support. Getting nearer to the school, I kept telling myself that I can do this for the gold and for We’koqma’q, but as I haven’t won the race yet, now was not the time to slow down or celebrate early.

Coming up to the finish line. Photo courtesy of Limitless Race Timing.

Then finally, after doing my first race in May 2016, the 5000 metre in high school Track & Field, and coming up short several times before, I crossed the finish line and won my first race with a personal best to date of 18:03. I immediately went into a fast walk to cool down.

After the finish line, I walked over to the school and was soon greeted and congratulated by my girlfriend, my mother, and one of my aunts. Like placing third in Epic Canadian, winning gold didn’t really strike me nor sink in right away. I knew I won, but just didn’t feel it at the moment. I guess that, because it was my first time winning a race, I was just so used to, and happy with, coming so close, yet just not making it. 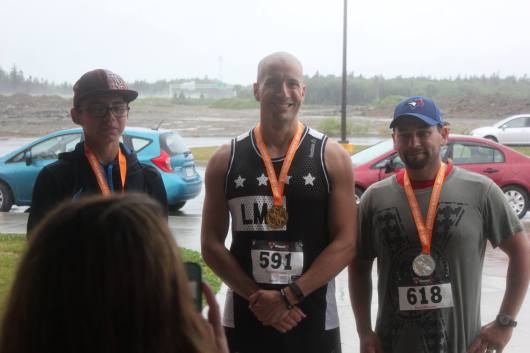 Talking with my closest supporters at the race, other runners started to come across the finish line, and I congratulated all those who were within my vicinity. We then made our way to the registration area. Waiting for the last runner before the medals were to be awarded, I went inside the school to stay warm. My mother and girlfriend followed along, and we chatted amongst ourselves and with others coming in and out of the school. Finally, we got word that the medal ceremony was commencing. We went outside and things got underway. They announced the overall male winner, and I did beam with pride and a smile as I walked over to accept my first gold medal, and eventually, my second gold medal for placing first in my age division. My goddaughter (who just turned 14) was the second overall female and second in her age division. It goes without saying that I’m proud of her, and am excited for her future in racing. 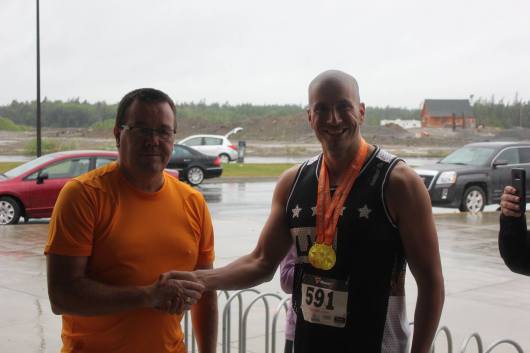 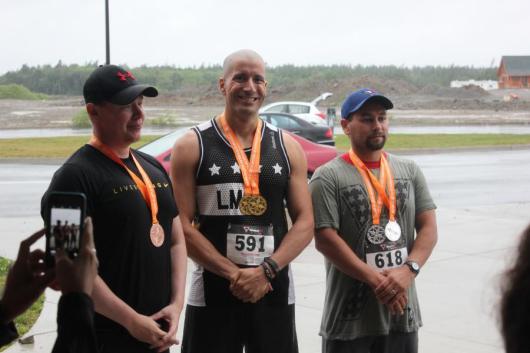 Me and my goddaughter (who placed second twice). Photo courtesy of Kerrianne Ryan. 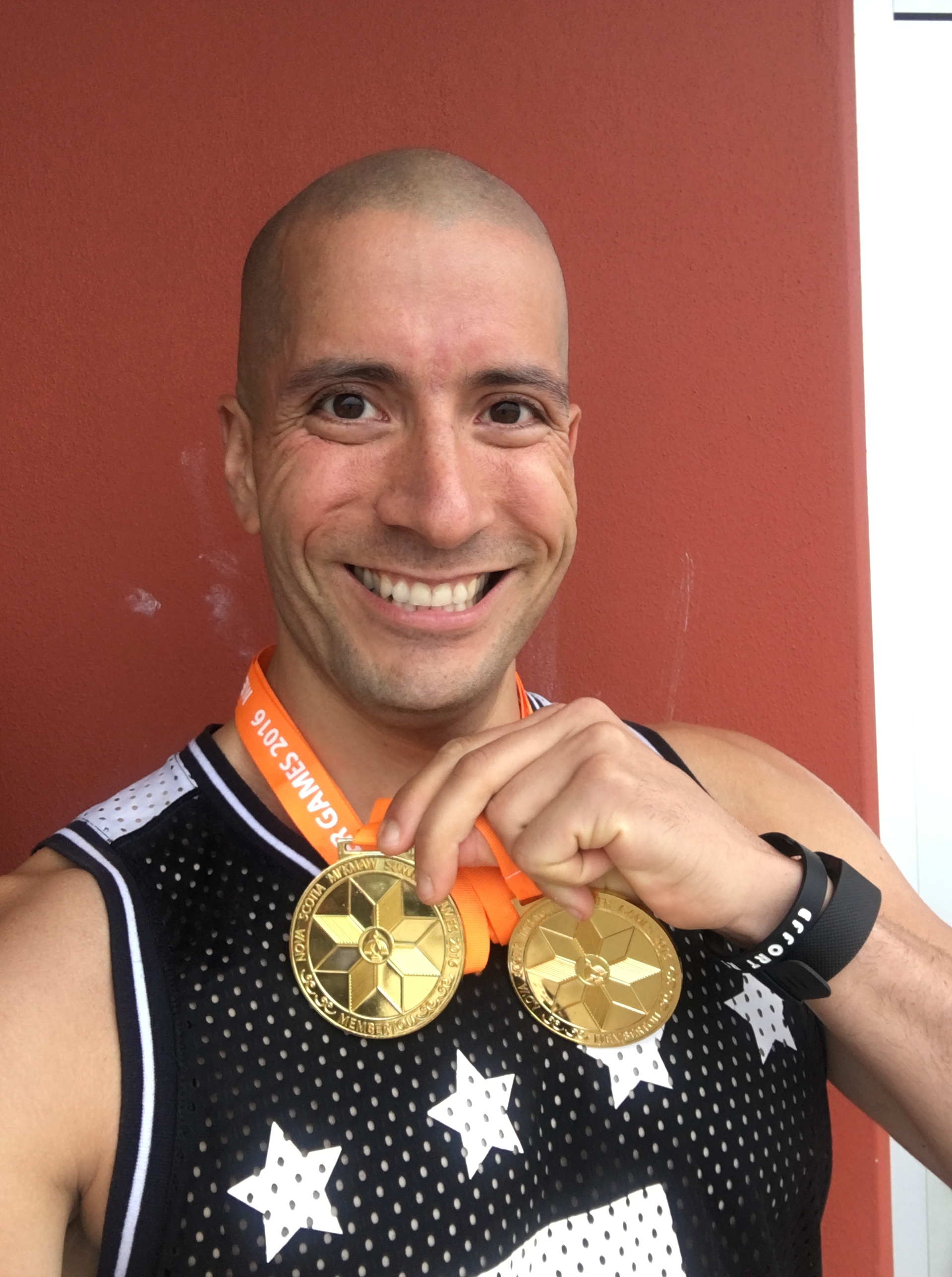 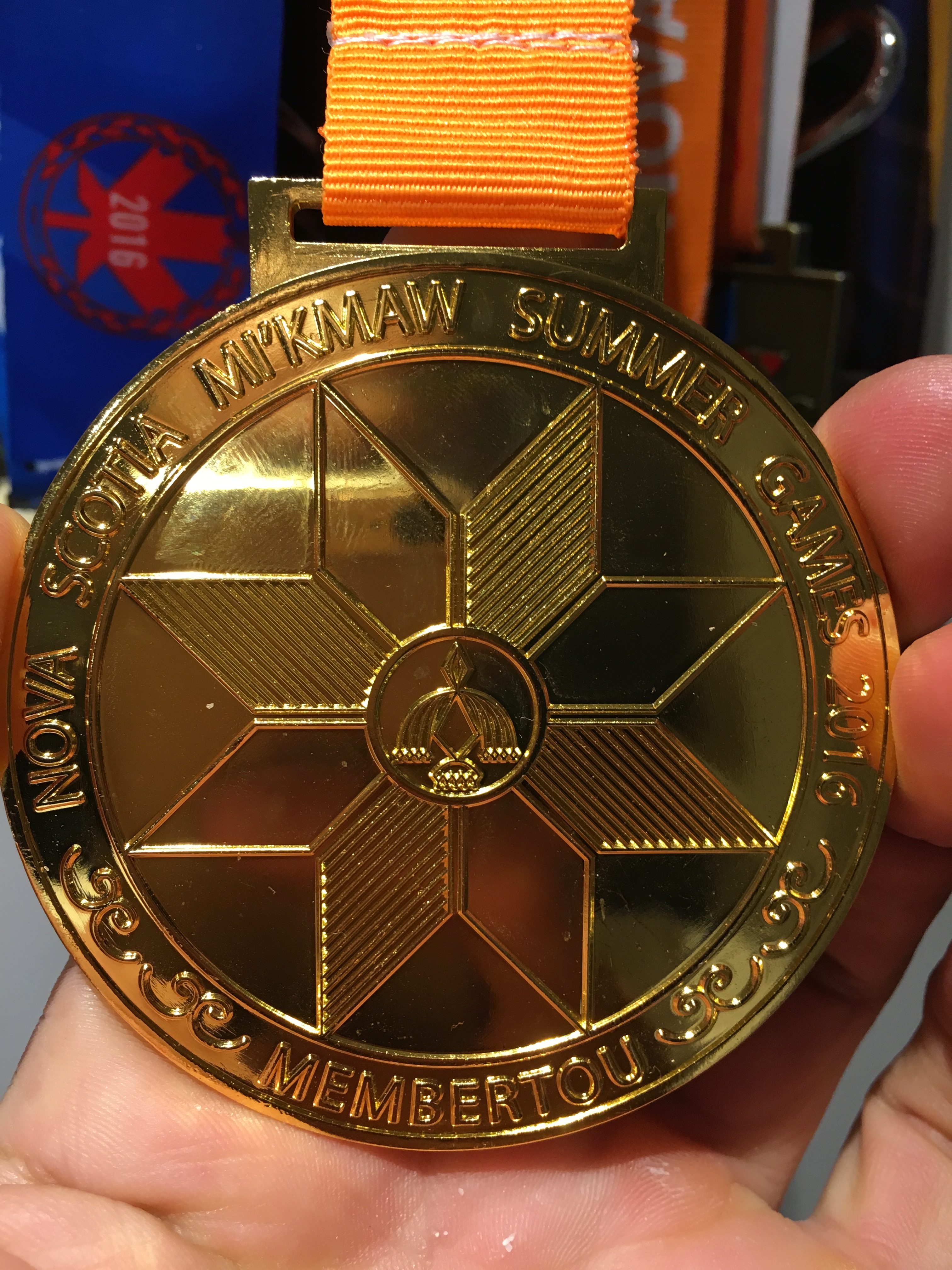 Close-up of the medal.

After I received my two medals, I uploaded a selfie of my medals and me, dedicating the win to where I was raised; We’koqma’q First Nation. I was congratulated from many. It felt good to finally win a race, but felt great to have won it for the community that I represented at the NSMSG. My girlfriend and I went back to the hotel so I could shower, checkout, and grab breakfast. We returned to Membertou to go to the NSMSG tent, which had a We’koqma’q section near the end. I shared with others, including family, other community members, and our Chief, my success that morning. We hung out for a bit and chatted, but as I had to teach class that night, we said our farewells to those there, and wearing my two medals for a few hours, we drove back to Halifax. 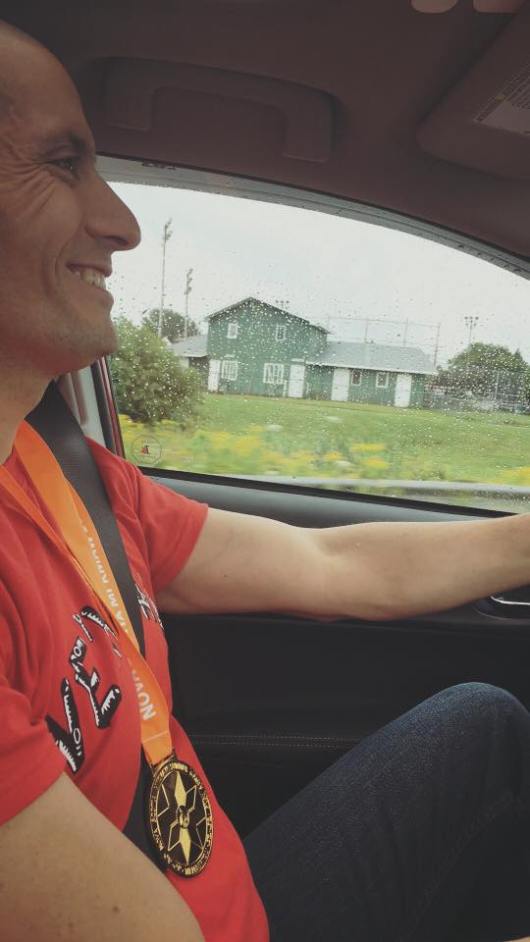 Driving back wearing my medals. Photo courtesy of Kerrianne Ryan.

It’s hard to say what my favourite race is to date. I loved the challenge and uniqueness of Epic Canadian and the historical people it honours, and the NSMSG allowed me to represent my community. Every race can be special for various reasons (a personal best, a first time race, placing first for the first time, the history behind it, being able to represent your home community, etc…), and for me, the NSMSG 5K ranks up there as I won gold for We’koqma’q.