On August 24, I did the Nova Scotia Mi’kmaw Summer Games (NSMSG) 5K. This was the same race that I did last year in Membertou First Nation, but this time, it was in Wagmatcook First Nation, the host community. I was determined to defend my gold medal win from 2016.

The day before, I left Halifax and headed up to We’koqma’q First Nation. Stopping in Millbrook First Nation for gas and a late supper, I checked my inbox and saw that my goddaughter, who also represented Nova Scotia at the North American Indigenous Games (NAIG) in July, messaged me. She was wondering if I was doing the 5K and if I could give her a lift (along with her sister) up and spend the night wherever I was staying. This wasn’t a problem, but would delay my arrival a bit as I would have to stop in Pictou Landing First Nation to pick them up. The ride with them was good company. I asked them about their running history and activities and shared my own with them. They seemed pretty amazed when I described what a marathon entailed. We arrived at my mother’s place a bit behind schedule, talked for a little, but then I needed to get to sleep as I had a long day and drive. 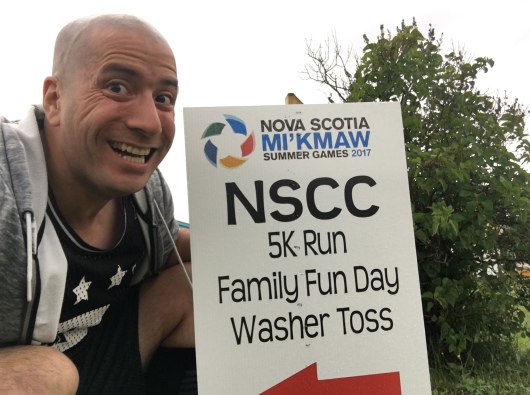 The next morning, I woke up the girls. I wanted to get to Wagmatcook First Nation early as I don’t like to feel rushed/stressed out prior to a race. I had some oatmeal for breakfast, and decided to try some coffee. I normally don’t do coffee prior to a race, but my fiancé suggested trying it as she read a study about it’s positive effects prior to physical activity. So I broke my own running rule and experimented on race day. When we arrived, we were the first participants to park. I saw one of the NSMSG organizers and had a brief chat. Soon other participants showed up, including some NIAG athletes, which made me a bit nervous as I knew they’d be well-trained and fresh of the games. There were about 31 runners this time, four less than last year. I met a few new folks, some of whom were attending the NSMSG for the first time. One vibe/thing I kept hearing was that, “Jarvis is fast,” and “He’s the one to beat in this race.” While flattering, I tried to stay humble and focus on the upcoming race. Then I started my warmup, consisting of basic BODYATTACK™ moves and very light running.

While I was the only We’koqma’q First Nation person running last year, for the 2017 NSMSG 5K, I was joined by three others, including my brother Matt. I bought him a pair of shoes a few months ago on the condition that he run in the 5K. He kept his word and came to the race. Apparently one of the other We’koqma’q First Nation runners wanted to make a point to beat Matt in the race, which I found amusing in the spirit of fun competition.

The race began at least 30 minutes after the scheduled start. A part of me worried if my warmup might have cooled off by the start of the race, but thought that it was better to warmup and cool down rather than to not have warmed up at all. We took our positions. The timer explained the route, counted us down, and then we were all off.

The race started up a hill. The overall roads were very bad, with numerous cracks and potholes, and I spent quite a bit of time at the start trying to avoid them. I learned after the race that one runner even rolled his ankle and had to drop out. Two younger guys got ahead of me right away. Initially I panicked and thought that they’d be winning it. But one advantage of being behind someone is that you can evaluate their pace and perhaps get a rough idea of how they utilize their stamina/endurance. I thought that the younger guy was putting in a bit too much right away, and in about 30 to 40 seconds, I passed him. Then there was a slightly older runner. He had pretty good energy and a decent pace, and I was wondering if he would be able to keep it up to stay ahead of me. At about what I think was two minutes or so (I chose to not use music or Runkeeper), I started catching up to first place, knowing that I can pass with a gradual pace rather than full sprint. Once I did, I increased my speed a tad bit, knowing that I had enough energy to get me through.

At the halfway mark, I was greeted by my cousin (whom I’ve ran against in several other races), who was volunteering with the 5K. Turning back, I came across the second-place runner, and estimated that I was maybe 40 seconds ahead of him. I gave him, and others, a quick wave, as we ran by each other. Then at about three-fourths of the way back, something happened to me that I haven’t felt since grade three; abdominal cramps from running. I was taken aback, as I always thought that cramps came from dehydration. I thought that I had enough water that day, but maybe I had too much. I really didn’t drink enough water to pre-hydrate (even for a 5K), and I started wondering if the coffee that I had may have had something to do with it. So I slightly lowered my speed so that the cramps could subside until I was ready to resume my normal speed. I also felt my left knee acting up. I injured my meniscus back at the Bluenose Marathon, and while I went to physiotherapy for it and have been back to running and teaching, I’m not quite 100% just yet. While I wanted to beat my time from last year of 18:03, I knew it wasn’t going to happen due to the initial hill, bad roads, my knee, and the temporary abdominal cramps. 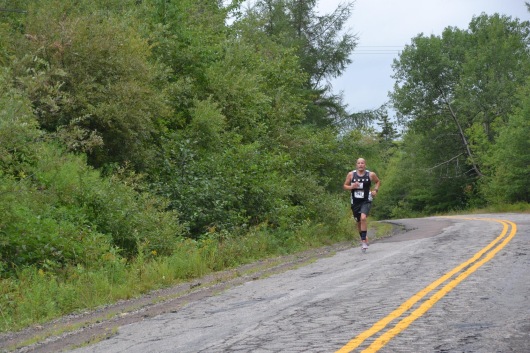 Towards the end of the race, I did have a bit of fun. Since late-May, I’ve been playing Friday the 13th: The Game, a lot. The counselors in the game have various statistics: composure, luck, repair, speed, stamina, stealth, and strength. I was thinking, “If I was a character in the game, based upon real life, what would my statistics look like?” I think that my speed would be an eight out of ten (not an actual ten). I really don’t consider myself to be a fast runner per se; I’m sure that I’d lose a 100M sprint. Rather, I think my endurance and stamina just allow me to do a very good speed and to maintain it for a while, so I’d give my stamina a ten out of ten. I imagined Jason Voorhees chasing me, but I was able to just stay ahead and not get caught/killed. 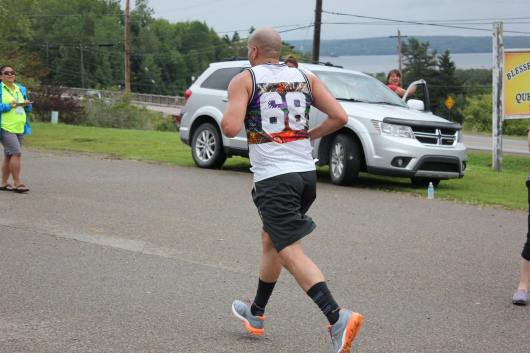 Soon I recognized the first hill that we all had to run up on at the start. Making my way towards the finish via a sharp turn, I crossed it and earned first place with a time of 19:20, one minute and 17 seconds slower than last year’s NSMSG 5K. I transitioned into my post-race fast walk to start lowering my heart rate and breathing. I then went back to the finish line and congratulated several runners who came in second, third, etc… as they crossed it. I got my car keys from my sister, who congratulated me along with my mother, so I could get my BCAAs. Eventually my Aunt Dolena showed up to congratulate me as well.

Posing with my Aunt Dolena.

After two fellow We’koqma’q First Nation runners crossed (one who earned third place in his division), my brother eventually finished. I was quite proud of him, especially given he never did a race until that morning. 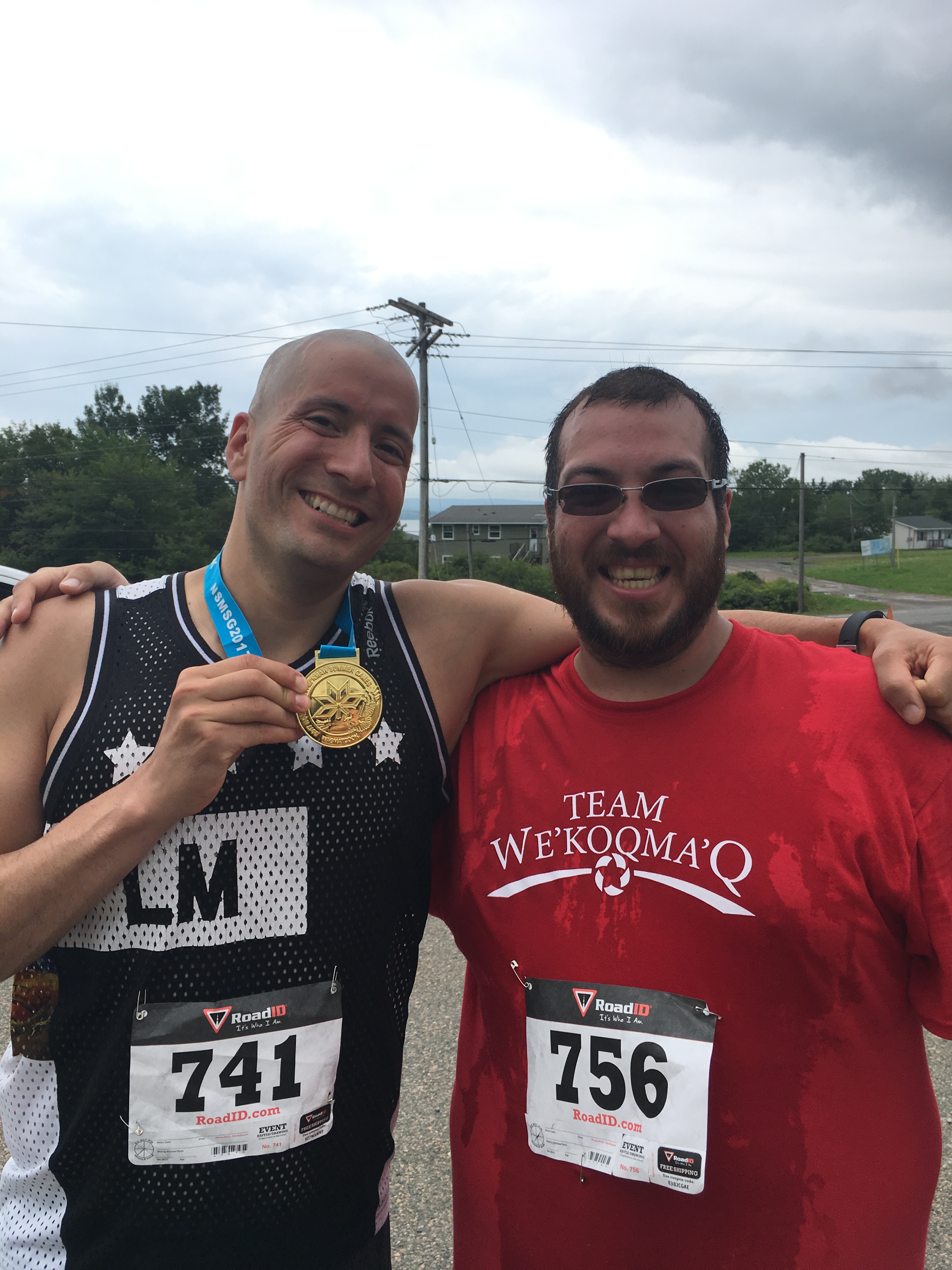 Posing with my brother Matt. It was his first 5K.

Soon everyone was done and the medal ceremony started. Unlike last year, they started with the lower ages (not overall winner), from bronze to gold, and worked their way up the ages. Since there were no overall medal winners (just age/gender division), I only received one gold medal. While I was hoping to get two gold medals (like last year), nevertheless I was still happy/proud of my accomplishment. I was also quite proud that my goddaughter earned a gold medal too (and her sister, who earned silver). Afterwards, a group shot of the medal winners was taken. 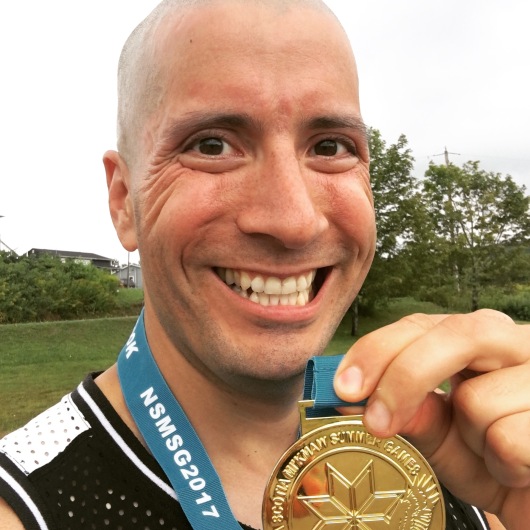 Posing with my goddaughter (centre with gold) and her sister (with silver).

Once back at my mother’s house, I showered and then dropped off the girls back in Wagmatcook First Nation, then returned to We’koqma’q First Nation. I spent the rest of the day wearing my Team We’koqma’q tank-top (and gold medal), and then went to go pay a quick visit to an Elder named Margaret Poulette (“Magit” in Mi’kmaw), who always reminds me of my grandmother. She asked me last year if I was doing the Fiddler’s Marathon, which I said no, and took to mean that she wanted to see me do a race. I invited her out that morning for the 5K but she was unable to make it. So like a young boy, I went over to her home to proudly show her the medal that I won. She congratulated me and we shared a quick hug. 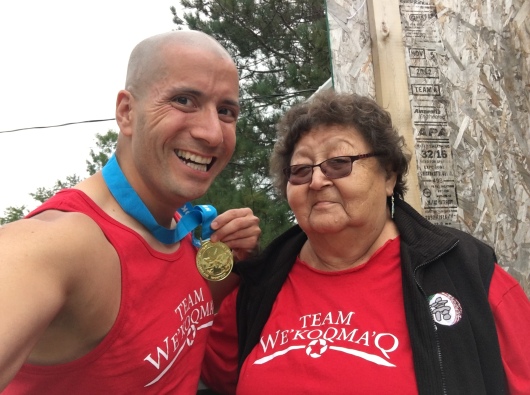 Had to go show Elder Magit my gold medal. Loved how we ended up matching that day.

One thing I am finding interesting about running (despite it being my second year) is that, with the NSMSG 5K (and the games in general), while other annual races usually stay in the same place/route, the NSMSG 5K changes every year due to a new host community. Next year, the games will be in Eskasoni First Nation, and I am hoping that my schedule allows me to attend to try and defend my gold medal for We’koqma’q First Nation.